Bees have been declared to be “the most important living being on the planet” by the Earthwatch Institute. While that may be a bit controversial, there is wide agreement that one-third of our global food supply is pollinated by bees. Perhaps more consequential, 75% of the leading agricultural crops worldwide either depend upon or benefit from the pollination of the honey bee. And yet, this critical insect is endangered and experiencing significant decline. There seems to be a consensus that the causes are due to habitat loss, climate change, toxic pesticides, and disease.

The honey bee evolved from a type of wasp over 100 million years ago. Incredibly, there is ample evidence to support the idea that the bee has been harvested for its honey and beeswax since the Neolithic Age (some 12,000 years ago)! More recently, the honey bee made its way to North America from Europe early in the 17th century. While certainly a non-native species, these European honey bees have become thoroughly integrated into our ecosystem and today are seemingly critical to human survival. 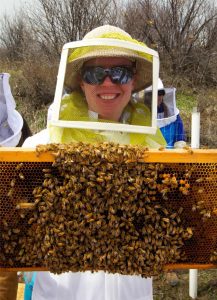 Meet Becky Edmiston… Benevolent Beekeeper! According to Becky, beekeeping is more art than science. That’s saying a lot coming from a Biology Professor at Colorado Mountain College. There are still many questions that have not been answered by science, so even Becky finds herself managing her bee colonies through trial and error. For the newly initiated beekeeping, while immensely satisfying, can also be quite frustrating. Once they dawn their “bee suit” for the first time, a beekeeper has started a journey that will never bee (pun intended) straightforward, as they are destined, according to Becky, to “learn from the bees… and they are amazing teachers.”

Becky grew up in Ohio, where she earned her undergraduate degree at Mount Union College, and then matriculated to the University of Colorado, Boulder where she studied for a Masters degree in Integrative Physiology. After spending 5 years at Western State College in Gunnison teaching biology, Becky moved to Steamboat to further her career at CMC, where she has been teaching for the past 9 years. Shortly thereafter, Becky stumbled into the CMC beekeeping club as a co-advisor because it is a hands-on way of understanding sustainability behaviors. With beekeeping increasing in popularity, Becky found that there was so much community interest in beekeeping that she and a few others founded the Routt County Beekeepers Association, of which she is currently the president.

Coincidentally during this time of the COVID virus, the honey bee is experiencing its own global pandemic. It too is subject to the impact of globalization. Various parasitic mites most likely “imported” from across the globe are spreading throughout the densely populated honey bee colonies. Recently there have also been reports of the Asian giant hornet making its way to our shores, and they represent yet one more potential threat to the honey bee population. Incredibly, the “murder hornet” as it has been dubbed is capable of decimating an entire hive in a matter of hours.

The domestic honey bee hive, called a Langstroth, is an exercise in efficiency. We’ve all seen those boxes stacked on top of one another. Depending upon the size, there could be as many as 50,000 bees per hive, and somehow each one of them knows their job. In simplistic terms, everything within the hive revolves around the Queen Bee who can lay up to 1,500 eggs per day. The females are the worker bees and make up the majority of the population. The males, who are the drones, do absolutely nothing and have but one responsibility, and that is to fertilize the virgin queen during the mating flight. The pollination endeavors of the honey bee contribute to biodiversity. In addition, bee colonies play a fundamental role in establishing ecosystems that provide life sustaining environments for all wildlife. Beekeepers in particular encourage the planting of wildflowers and a reduction in the use of harmful insecticides and herbicides. While the beekeepers continue the long history of harvesting honey, it could be argued they are also single-handedly saving the world… one colony at a time!

To donate or learn more about WHILD go here.

Please also let us know if you are aware of other local wildlife habitat improvement heroes!!